You may hear negative rights referred to as “liberties,” and that’s because they are basic human and civil rights stating that no one can interfere with our right to obtain something through trade or bartering.

Positive rights are often called “entitlements” because they are things that someone must provide to us, whether we’ve earned them or not. We don’t have to do anything to obtain positive rights; they’re granted to us.

A great example would be a person’s individual right to purchase something from a store. Some might think this is a positive right, but it’s actually a negative right. You have the right to go to the store and purchase a meal, provided you can pay for that meal. As a result, it’s your negative right to ensure that no one interferes with that.

Other negative rights are:

If you go there with money to pay for the meal, provide that money to the clerk, then the store worker must provide you with that meal.

A positive right refers to something that must be provided to you. For example, when you’re arrested, the police officer says:

“You have the right to an attorney; if you cannot afford one, one will be provided for you.”

That is a positive right.

There are many social and economic positive rights, as well. Housing, public education, national security, health care, social security, and certain standards of living are all positive rights. The government is required to provide you with these, even if you’re unable to provide them for yourself.

Positive rights, on the other hand, are subject to another person or group performing the action. To have a positive right, someone else must perform an action that is offering something to the situation. Where a negative right is requiring the person not to perform, a positive right requires them to perform.

Look at it this way:

A negative right forbids someone from committing and action against your rights.

A positive right obligates someone to act in accordance with your rights.

The distinction of positive and negative rights is practiced most prominently by Libertarians who believe that you can only create positive duties through the use of a contract. Many Liberal Democracies believe in negative rights, but they don’t all support positive rights. Regardless of each belief system, positive rights are usually guaranteed through laws.

It’s clear that in the positive rights vs. negative rights debate, there is much conflict. Many see their human rights as “inalienable” or “absolute.” But, there is a certain level of graded absolutism within these rights. Meaning, your rights are ranked by their level of importance and the amount of influence they have on other people.

Basically, certain rights are allowed to violate others as long as the rights we’re implementing are more important and necessary than the ones we’re violating.

For example, the negative right not to be killed is generally considered an inalienable right. We’re all required to refrain from killing each other but keep in mind that there is one small exception to the rule.

Here is where the contradictions start to come into play. We’re not allowed the right to kill anyone under any circumstance unless trying to prevent ourselves from being killed or injured by someone.

All of the severe crimes like murder, theft, and assault are considered prima facie but are still ranked based on ethical analysis. In many cases, one person must infringe on another person’s negative rights because by doing so, they’re protecting a more severe negative right that benefits the greater good and the public at large.

This is called the burden of proof. The burden of proof is when one party is believed to be correct, while the other side must provide enough evidence to prove that they’re innocent in a situation.

So, in a situation where a store owner feels threatened in their store by someone, they may pull a weapon on the customer or even tackle them to the ground. By doing so, they’ve violated the customer’s negative right to “not be assaulted,” but they’ve done it with the burden of proof that the customer was violating a greater obligation.

That said, if the customer was attempting to steal something and the clerk pulled a gun and shot the person, there would be an issue. Negative and positive rights consider the obligation not to kill as the highest obligation, which we should only violate in self-defense.

If the customer wasn’t posing a threat to the store clerk, they do not possess the right to kill that person, even if they are trying to steal.

Positive rights, on the other hand, transfer duty to another person. As a result, positive rights aren’t typically considered prima facie because they require additional time and analysis to determine the right choice.

In the example of the store clerk and the thief, the clerk will almost always exercise his prima facie rights because there is no time to think. It’s generally not necessary as long as you’re operating within ethical guidelines.

Self-defense, be it the highest obligation, doesn’t require any time because you need to exercise that right instantly.

Even more modest positive rights require time and additional thought. For example, someone might attempt to justify not helping someone in a situation that could potentially put them at risk as well. Where do the positive duties end, and the negative duties begin?

Libertarians believe that a contract must be created to establish a positive right.

An example of this would be the relationship between citizens and paramedics. A paramedic is responsible for helping anyone who is injured, hurt, or sick, correct? So that would mean that citizens have a positive right to receive emergency medical attention, whether they can afford it or not.

It’s because a contract was created and put in place by the paramedic and the company that hired that person. If you, as a normal citizen, drove down the street and saw someone being beaten up behind a building, you would not be obligated to help that person. It is your negative obligation to protect yourself from violence.

On the other hand, if a police officer was driving down that same street and saw that happening, the person in danger has the positive right to law enforcement intervention when they’re at risk. The police officer does not have the same negative right as you in this situation because they’ve sworn to protect the public and are legally obligated to do so.

So, while we all possess the negative right to defend our lives, we cannot force someone to help us or fight for us. We do not have a natural right to be provided with defense because that would violate someone else’s negative rights. Robert Nozick does a nice job of defining these differences in his book, Anarchy, State, and Utopia.

Certain medical professionals may not want to take part in these services due to moral or religious beliefs. If enough professionals opt not to participate, it will infringe on the rights of the person trying to receive the procedure or act.

The best example is the 2009 case of Janet Murdock. The terminally ill patient could not find anyone to participate in her assisted suicide due to fear of legal backlash. There is a consistent debate between the rights of patients and the rights of physicians. Should the licensing agents require physicians to conduct certain procedures in exchange for the privilege of receiving a license to practice medicine?

Negative vs. positive rights do take a lot of criticism because many political philosophers and political theorists and people believe that both rights should take place simultaneously, so there is no difference between the two.

Philosopher Henry Shue states that “honoring one right will require avoidance of one but protection of another.” So avoidance, protection, and repair are required in each situation. For example, a burglar must avoid being caught by the homeowner. The police are responsible for protecting the homeowner. If they fail, the insurance company may have to pick up the pieces by providing payout to the person whose items were stolen.

James P. Sterba is a philosophy professor at Notre Dame University, and he makes similar claims in saying:

“What is at stake is the liberty of the poor not to be interfered with in taking from the surplus possessions of the right [emphasis added] what is necessary to satisfy their basic needs. Needless to say, libertarians would want to deny that the poor have this liberty. But how could they justify such a denial? As this liberty of the poor has been specified, it is not a positive right to receive something, but a negative right of non-interference.”

Let’s break this down.

He is saying that taking away the right to public welfare benefits would take away the non-interference right of the poor. In reality, Libertarians who believe that the poor should not receive benefits from the wealthier folk paying taxes are actually violating the poor’s negative rights.

Understanding negative vs. positive rights is important to understanding Libertarianism beliefs as well as the fundamental liberties and responsibilities we have as moral United States citizens. To see more examples of negative and positive rights, go to the glossary page for a breakdown of each term.

Libertarian vs. Liberal: Economics, Freedom, and the Fight for Liberty 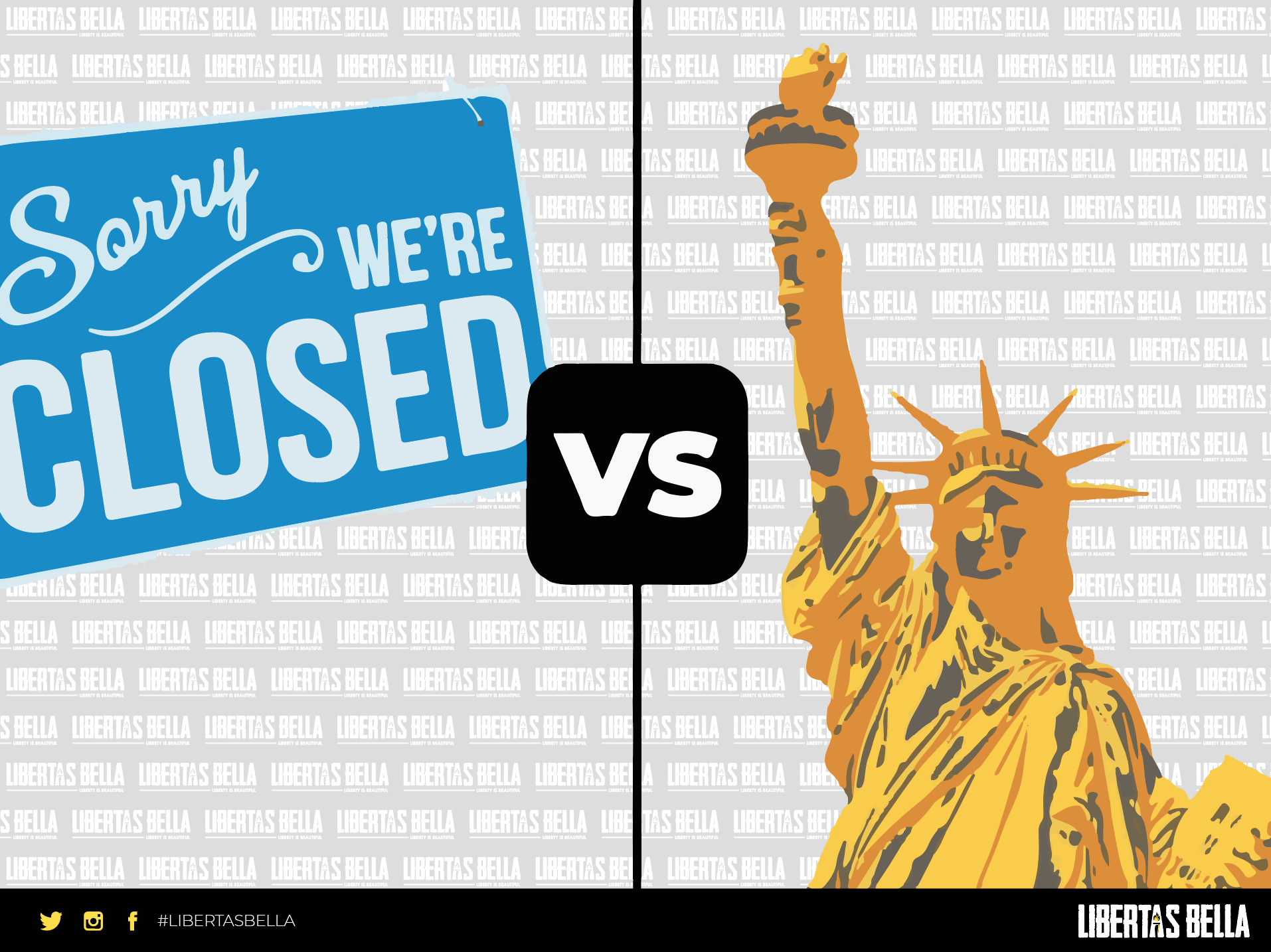 COVID-19 hit America’s shores early in 2020 and since then there has been an abundance of misinformation and shifting goalpost. We have compiled all the data that you need about COVID and your civil liberties to take action.