Regardless of where one falls politically, the sanctity of the vote is a bedrock of a functioning constitutional republic. Voters have to believe their vote matters. And that the vote is free, fair, and accurate.

The basic facts of the 2020 American Presidential election are concerning because mounting evidence indicates there’s been a concerted effort by state Democratic Parties to flip the election from President Donald Trump to former Vice President Joe Biden in a number of key swing states with the help of notoriously corrupt Democratic Party machines in at least five American cities — Detroit, Milwaukee, Philadelphia, Pittsburg, and Atlanta.

Here are the basic facts of the case: On Election Night when America went to bed, President Trump had a commanding lead in virtually every swing state, as well as Virginia, which no one expected him to win.

However, when America woke up the next day, we found that he’d lost these leads, largely on the basis of mail-in ballots found in the middle of the night and out from under the watchful eye of legal election monitors.

What’s more, these massive caches of votes – almost all of which were for former Vice President Biden – came via large dumps primarily from the five aforementioned cities in states predominantly run by Democratic governors.

When one looks at the statistical likelihood of the reported turnout, the numbers are so improbable they’re more at home in a one-party state like Saddam Hussein’s Iraq or North Korea.

What’s more, Biden’s victory does not square with the results of the Republican Party nationally: Republicans won 28 of 29 competitive House seats and Democrats were unable to flip a single state legislature. Joe Biden secured a scant three of the so-called “Bellwether Districts” that almost always choose the winner, one of which was in Delaware. Judicial Watch found 353 counties in 29 different states who had higher than 100 percent turnout.

Anecdotally, swing states tend to follow Florida in terms of swinging left or right. This is particularly true in Michigan, which has voted in lockstep with Florida since 1968. Nearly three dozen states had counting machines connected to the Internet during the election, which is inherently insecure. Joe Biden’s lead among mail-in ballots was massive in two states — Michigan and Pennsylvania — while it was in the single digits in most states.

Evidence of chicanery, irregularities, and outright manipulation have poured in from a variety of states — Pennsylvania, Michigan, Georgia, Wisconsin, North Carolina, Texas, New Jersey, Nevada, and Arizona. There was a massive spike in the number of Google searches for “election fraud punishment” in swing states in the 30 days leading up to the election. This evidence could easily be dismissed as simply weird if one is being generous or naive.

However, it is our belief that this mountain of data, much of it dissolute and unconnected to one another, when taken in toto paints a clear picture of voter fraud on a scale so large that it is unthinkable that it happened in the United States.

Below we explore the details and the data of what happened in Georgia, nicknamed “The Peach State“, on Election Day. Elsewhere we explore similar efforts in the key swing states of Wisconsin, Michigan, and Pennsylvania.

All of the posts in this series will be updated as more credible information is uncovered.

One Georgia state law makes it incredibly easy to commit voter fraud in the state: There is no length of residency requirement in the State of Georgia. Indeed, the Georgia Democratic Party is hoping to leverage this quirk in Georgia law to flood the state with outsiders in the event that there are any runoffs in their two Senate elections this year. This frankly calls into question any results coming out of the state. However, there are more specific reasons to consider former Vice President Joe Biden’s Georgia victory a steal.

There are the usual types of shenanigans we have seen throughout the 2020 election, for example the “glitches” in counting that always seem to favor Biden. People’s Pundit reported that there were 132,000 audit red flags for registered voters in Fulton County alone.

Voter irregularities are nothing new in Georgia. There were 1,000 examples of double voting in September 2020. These are, of course, just the ones that we know about.

Matt Braynard, the Executive Director of Look Ahead America and former Data Chief and Strategist for Trump for President reports massive irregularities pointing toward fraud in the state: 24,475 votes likely ineligible because the person no longer lives where they are registered to vote. More than a quarter-million Georgians requested ballots but never received them. He has uncovered 20 dead people whose ballots were processed.

Vote “curing,” where absentee and mail-in ballots are “fixed” to reflect the alleged intent of the voter is also taking place in Georgia. In fact, the Democrats are training an army of canvassers to go door to door trying to find people and get them to “fix” their ballots. A virtual training seminar appeared online for just this purpose.

Of course, no story of election fraud in 2020 would be complete without mystery ballots arriving in the middle of the night.

Georgia has experienced similar “glitches” — all of which favor Joe Biden — as Michigan and other states using the same voting software. NOQ Report has compiled a state-by-state index of vote switching, with 17,407 votes switched in Georgia alone.

Real Clear Investigations reported on “glitching” in the Georgia vote counting software. This includes a surge of 20,000 mail-in ballots for Joe Biden at the same time that there was a mysterious disappearance of 1,000 votes for President Donald Trump. It is unlikely that this is a single, isolated example.

Georgia was one of the states where counting mysteriously stopped only to be resumed in the middle of the night. There was at least a pretense of an explanation here — they claimed there was a “broken pipe” that needed repairing before counting could continue. This later turned out to be either a major exaggeration or a total fabrication.

Both U.S. Senators from Georgia have called upon the Secretary of State, a Republican, to resign due to election irregularities and potential fraud in the state.

Take Action Today and Save America

All of this is incredibly disheartening, however, patriots should not despair. President Trump is not giving up the fight, Congressional Republicans are taking up the fight and patriotic media like OANN and Newsmax are covering the electoral chicanery closely.

But it’s not just up to the patriotic media and elected officials. You need to join in the fight as well. So how can you do that?

First, you should call your elected officials, whether they be friend or foe. Let them know that you are watching how they respond to this attempted theft of the American Presidential election. Call your representatives in both the state legislature and the Congress, as well as your state speaker.

Insist on answers about concrete steps that are being taken to ensure the integrity of the vote in your state. Don’t accept empty statements about the importance of every vote. Demand real answers.  A Twitter account has made what is actually a very good script for you to follow when you call in. Be firm, but polite.

If you want to take to the streets, there are many opportunities for that as well. Stop The Steal is the movement dedicated to putting bodies in the streets of our nation’s state capitals to let our elected officials know that we are not going to stand for seeing our elections stolen in a manner befitting Zimbabwe.

The effort in Georgia is being led by Daniel Bostic, CJ Pearson, and Amy Kremer. You can find nearly daily rallies at the state capitol in Atlanta. What’s more, a nationwide rally in DC called the Million MAGA March is scheduled for November 14 – even though the Democratic government of Washington, DC has responded with new COVID restrictions designed to cripple the march.

What can you do? Quite a lot. Nothing less than the future of the country is at stake. If they can steal this election, don’t expect another one to be free and fair. But do expect a lot of gun grabs and speech law 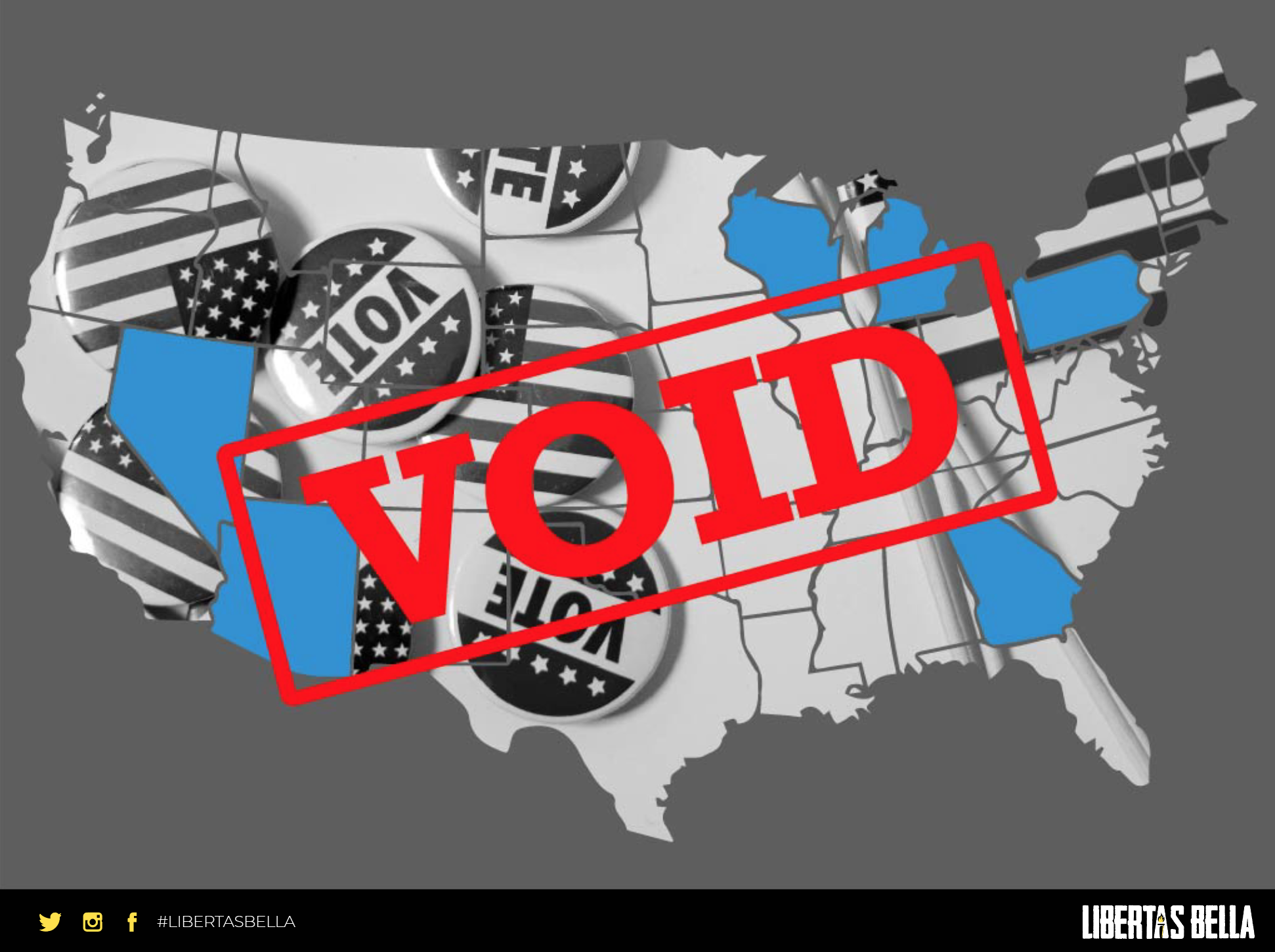 The basic facts of the 2020 American Presidential election are concerning because mounting evidence indicates there’s been a concerted effort by state Democratic Parties to flip the election from President Donald Trump to former Vice President Joe Biden in a number of key swing states with the help of notoriously corrupt Democratic Party machines in at least five American cities — Detroit, Milwaukee, Philadelphia, Pittsburg, and Atlanta. 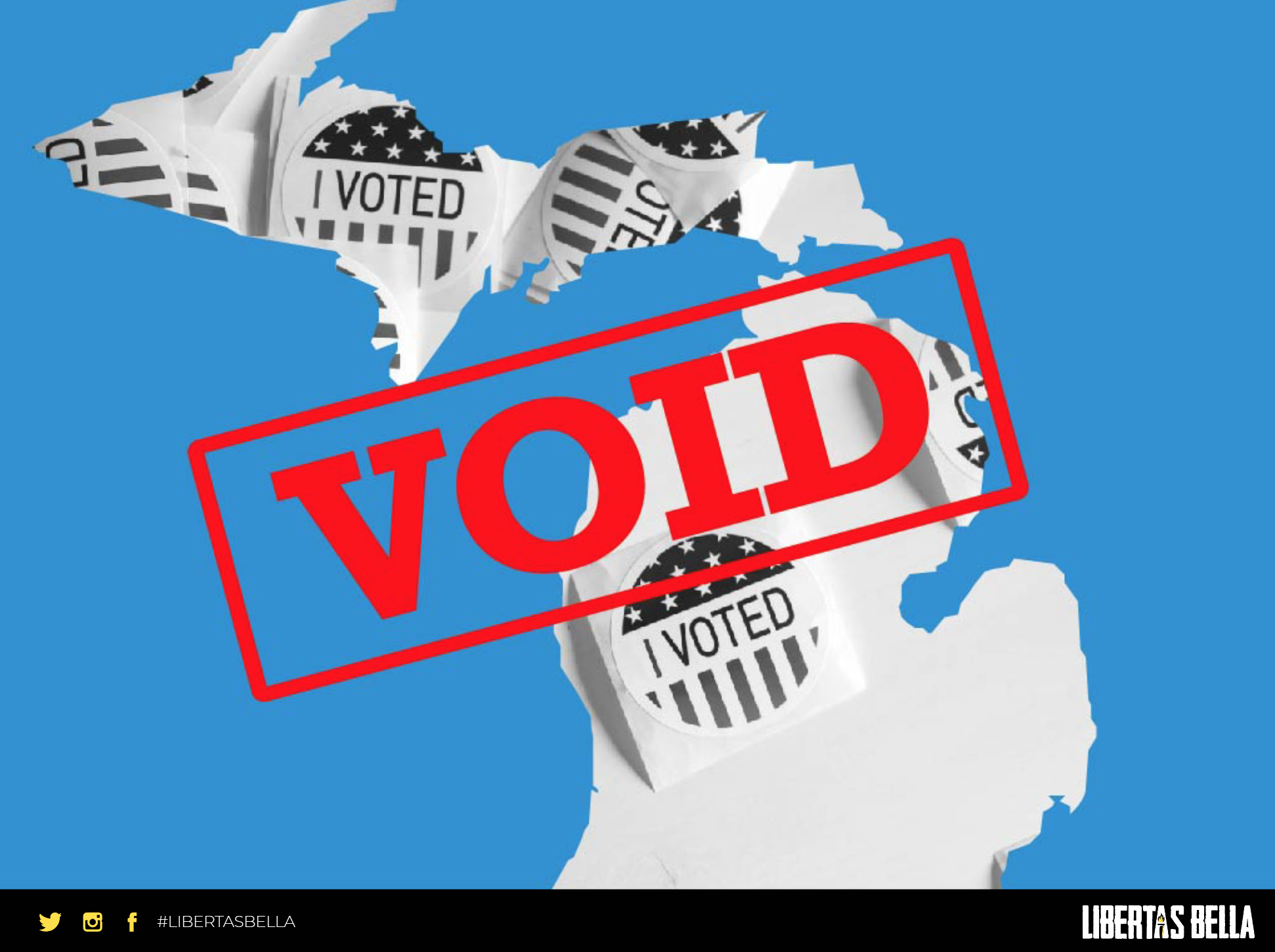 Regardless of where one falls politically, the sanctity of the vote is a bedrock of a functioning representative democracy. Voters have to believe their vote matters. And that the vote is free and fair. 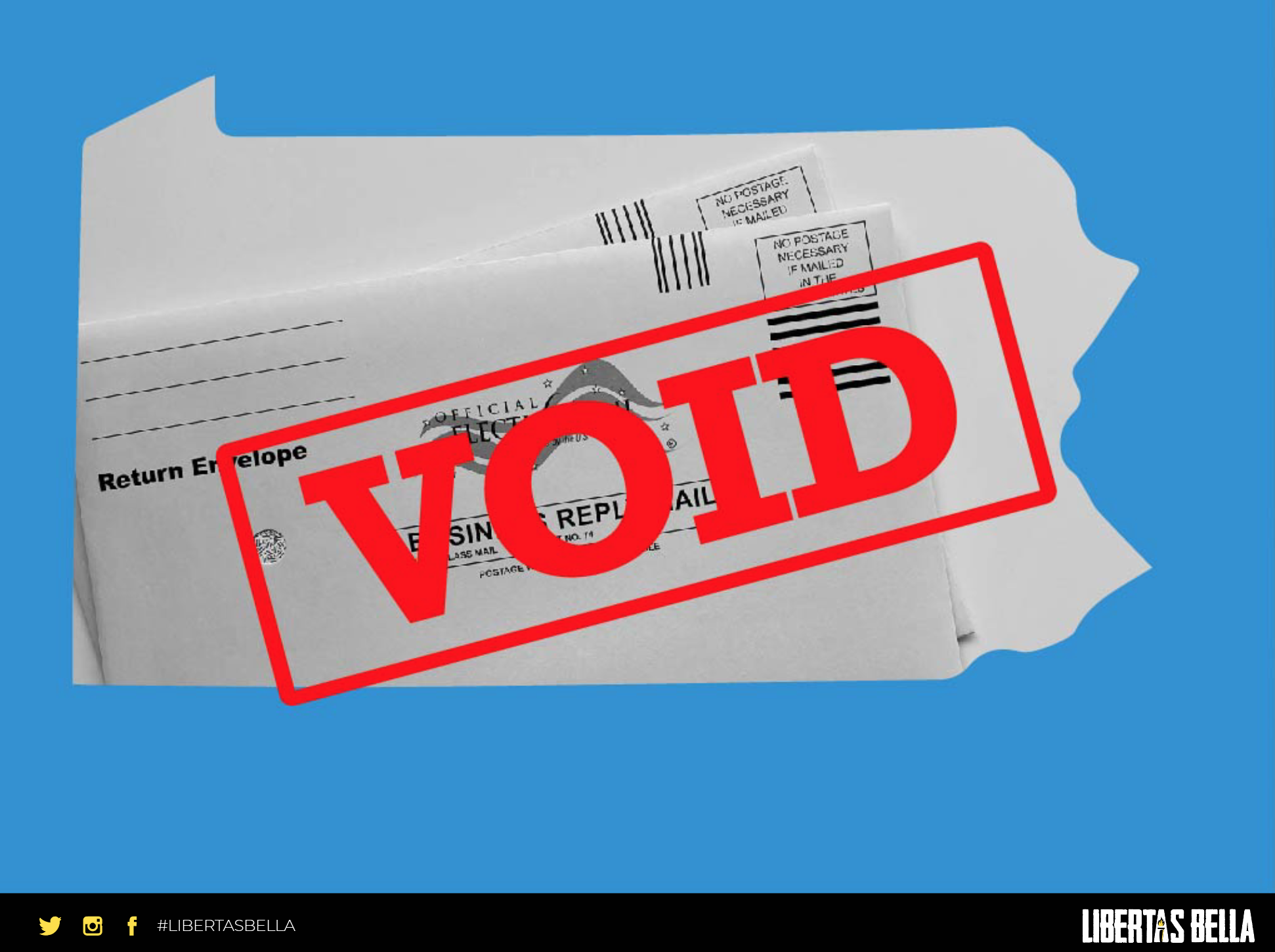 Voter turnout was up everywhere. This was expected due to the highly partisan and hotly contested nature of the election. However, there is something worth taking a closer look at in the Commonwealth of Pennsylvania — namely the incredibly lopsided impact that mail-in ballots had on the election. 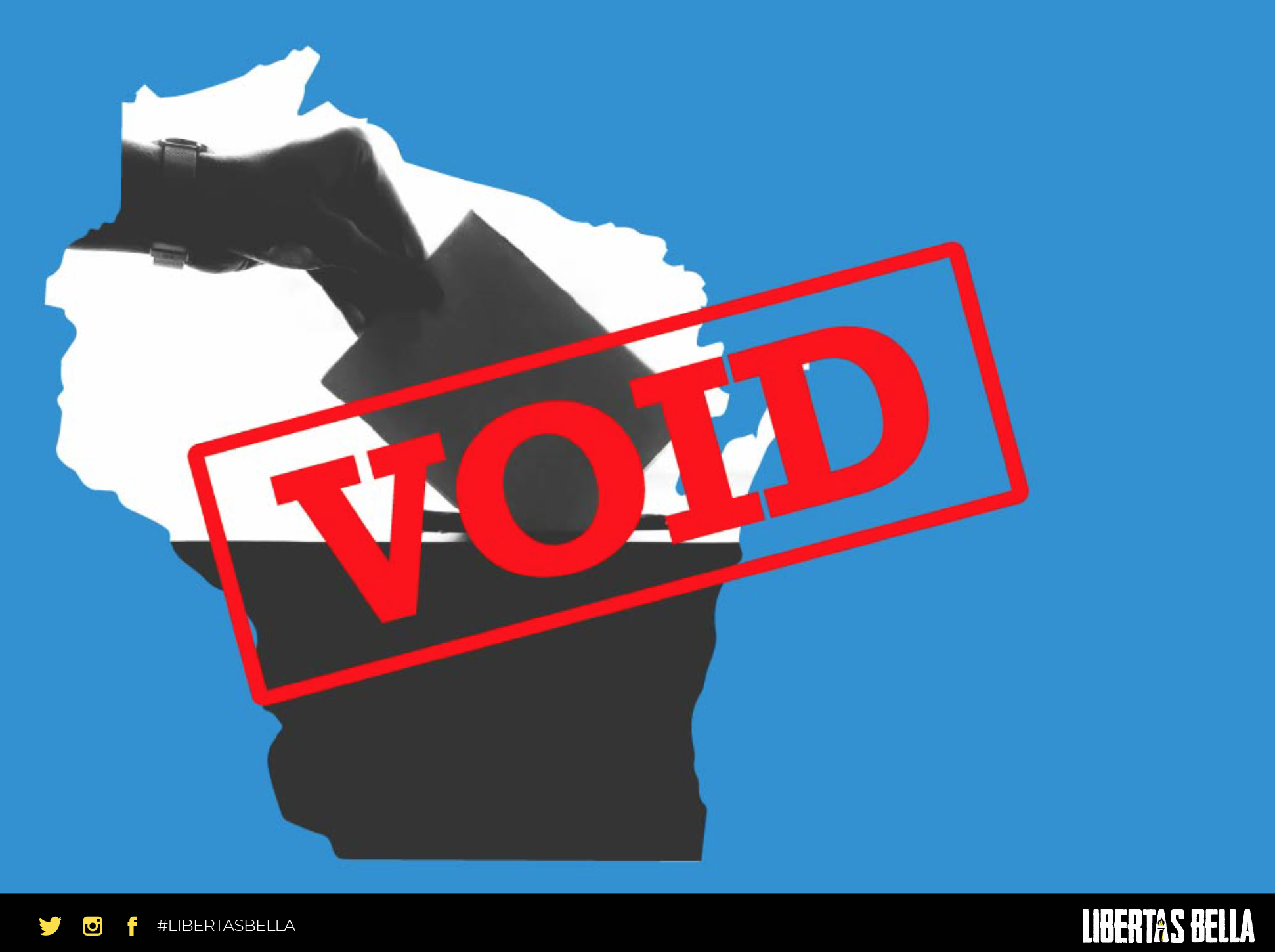 The voter turnout in Wisconsin is one of the most damning pieces of evidence in the theft of the United States election. Turnout in Wisconsin for the Presidential election 2020 stood at a whopping 89 percent. This is the kind of turnout generally enjoyed by dictators in one-party states.